We’re now over halfway through Ramadan, the holiest month in the Islamic calendar – the month when the Qu’ran was first revealed to Muhammad ﷺ.

In countless homes across the globe, for more than two weeks, muslims have risen in the darkness before daybreak to eat a meal which must sustain them until sunset.

The physical & psychological effects of fasting

Here in Ontario, Canada, daytime temperatures have been in the mid-thirties for week after week, making thirst and dehydration constant companions of anyone fasting. Due to our latitude, it’s a sixteen-hour day and I found myself feeling the fatigue after the first week. When fasting began, the last of the daily prayers, Isha, wasn’t due until after 10.30pm, so you couldn’t grab an early night before rising at 4.15am to eat. Although we went back to bed for a couple of hours after the dawn prayer, the disrupted sleep pattern took it’s toll.

Yet, at the same time, fasting makes you more aware of your strength. Somehow, you draw on reserves of energy you didn’t know you had. Some days are tough, so that by evening I have barely energy left to prepare our meal, but on others I’ve been out running and swimming as normal – I feel lean and lithe and it’s not hard to imagine that the drop in artificial stimulants, like sugar and caffeine, has led to a better functioning physical machine.

The effects of fasting aren’t just limited to the body. It induces a more contemplative mood, bringing a heightened spiritual awareness and a relaxing of the mind and emotions. The self-control and discipline of the Ramadan rituals affects how a person thinks, behaves and feels, combining to bring an enhanced clarity to their perspective.

Throughout these last days of Ramadan, instead of flagging, muslims increase the level of intensity devoted to prayer and spiritual reflection, as the yearly opportunity to cleanse the soul draws to an end. It’s during the last ten days, that Lailat-ul Qadr, The Night Of Power, occurs. This is the anniversary of the night when the divine message of the Qur’an was first transmitted to Man and there is great bounty in spending that night in prayer and contemplation.

Muhammad ﷺ was an illiterate orphan born into the idolatrous, tribal world of 6th century Arabia who, through a reputation for honesty and hard work, attracted the attention of a wealthy businesswoman, Khadijah. She married him when she was 40 and he was 25. They lived 25 years together and had six children before her death. She was his only wife during that time. It was fifteen years into their marriage when the first revelation came from Allah.

A gentle, meditative person, as he grew older Muhammad ﷺ often withdrew to a cave on the nearby Mount Hira. He would take provisions for a number of days and return only when he had finished them. He spent time reflecting on society and its problems, which included a lack of concern for the less fortunate like orphans, ill-treatment of women, an increase in decadent behavior, and a concern with wealth that led to cheating and abuses. He searched for ways to alleviate the problems that he believed were destroying his society and its core values.

It was here at the age of forty, during the month of Ramadan, that the angel Jibril (Gabriel) appeared before him and said, “Iqra!” – (“Read!”) Muhammad ﷺ said he couldn’t read and the angel gripped him and squeezed with such crushing strength that Muhammad ﷺ thought he would suffocate. When he released him, the angel again commanded, “Iqra!” and Muhammad ﷺ gave the same reply. Again, the angel squeezed him, even harder, before releasing him with the same command, “Iqra!” and again Muhammad ﷺ gave the same response. The angel hugged him for the third time, so hard that Muhammad ﷺ thought he might die, and he cried, “What shall I read?” The angel then released him, saying,

“Read in the name of your Lord who created. Created man from a (mere) clot of congealed blood. Read, your Lord is the most Generous. Who taught (the use of) the pen. Taught man what he did not know.”

Muhammad ﷺ recited the verses and felt as though they were written on his heart, then he looked around and found himself alone. Glancing upwards he saw the angel Jibril flying in the shape of a giant man. He watched until he disappeared then rushed home in a panic, where he told Khadijah what had happened.

And so Islam was born, as Muhammad ﷺ went on to receive further revelations, which he recited and memorized, amazing his community with the beauty of such verses, coming from one who could neither read nor write.

The Night of Power 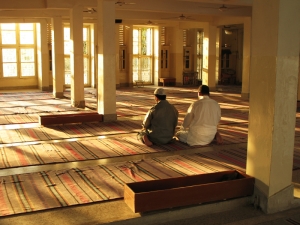 We don’t know which night during Ramadan the first revelation occurred, but we are told it was in the final ten days and that it happened on an odd-numbered night. So muslims spend these last nights in increased worship and recitation of the Qur’an, hoping that they will be doing these activities on the Night of Power.

Some muslims spend this time in I’tikaaf, a kind of spiritual retreat where a person stays in the mosque, praying and reciting the Qu’ran, leaving only to bathe. During this time, they must refrain from all things prohibited and strive to be totally in the service of Allah.

The muslim method of prayer

For those of us constrained by the needs of family and small children, there are other ways to increase our devotion. The muslim prayer has a specific set of motions and words which are performed in a certain order; a single execution of these is called a rak’at. You may have seen muslims praying on television perhaps, and noticed how they stand, bend, touch their heads to the floor and kneel. These are all movements making up a rak’at. Each of the five daily prayers has an obligatory number of rak’ats;

On top of these farz (obligatory) rak’ats, the prophet performed additional ones, known as sunnah, and three extra after Isha, called witr. For those who want to go the extra mile there are nafl – further optional rak’ats.

Tarawih, the special Ramadan prayers, are performed after Isha and can be anything from 8 to 20 rak’ats, depending on what school of thought you follow. There is also another prayer called Tahajjud. Although not one of the five obligatory prayers, it was regularly performed by the Prophet and is another way in which it’s possible to make the presence of God in your life a more conscious and intensely experienced reality. Tahajjud is performed in the middle of the night, after the individual has gone to sleep with an intention to wake and perform it. It consists of 2 rak’ats followed by however many more one wishes to perform.

So, as you can see, it’s up to each person to decide what is workable for themselves and there’s a vast degree of freedom in choosing what’s acceptable for the self. It’s not meant to be a test of stamina or a crushing hardship, simply a way for an individual to expand and deepen their relationship with their creator.

Join me for my final post in this Ramadan series, when I’ll tell you about the celebration at the end of the fasting, Eid-ul Fitr…

The Good, The Bad & The Hungry

7 thoughts on “Once Upon a Time in the Hijaz”